How We Drove Participants From Europe, USA, And Asia To NEWENERGY International Conference

The business
NEWENERGY Global Startup Fest
The goal
To drive startups to participate in the conference and to increase the number of visitors
The result
700 applications for the startup contest, 250 engage visitors

In the end, we reached all the goals and completed all the tasks. We were able to engage participants that passed the qualifying round with their projects. 100 of 700 engaged participants were allowed to enter the contest

The client came to us with a specific task and goals. They knew their target audience and the result they wanted to get. Our task was to drive the highest possible number of people to enter the conference, as well as to increase the number of startups participating in the conference, the number of energy companies, and internet experts.

As we had only two audiences to engage, we divided all our work into two stages:

TESTING. In the beginning, we conducted a detailed analysis that included the theme, the target audience, and the overall goal of the entire campaign. We also launched a three-week test campaign focused on engaging the participants and the energy startup projects.

LAUNCH. The results of the test campaign helped us to identify and highlight the most effective engagement tools.

Remarketing for the website’s visitors

During the campaign, we’ve been tracking referrals and indicators every three days and adjusted the ad settings and displays according to the results we received.

Such tracking helped us to save the budget and made it possible to complete all the tasks given to us.

The examples of banners ads created to drive startup projects

During the optimization process, we also added the remarketing and ad display for Facebook users, who visited the website before.

The examples of ads

During the campaign, we noticed that most of the referrals come from mobile apps; however, the users don’t register for some reason. We wanted to identify the reason for that; therefore, we conducted an analysis that showed than an order form contains too many fields and is three-page long. Most of the users didn’t have the patience to finish the target action.

The conference organizers followed our recommendations to change the form’s fields, and the problem was solved

During the second stage, ad displays were focused on driving visitors. We created different banners and texts, taking the conference venue and features into account, and reconfigured the settings.

The target audience consisted of people living in Astana and Kazakhstan, along with the people living in the neighboring cities. The main task of the second stage was to engage the audience, capture the attention of social media users, and spread information about the conference among the potential visitors.

In the end, we reached all the goals and completed all the tasks. We were able to engage participants that passed the qualifying round with their projects. 100 of 700 engaged participants were allowed to enter the contest.

The summary data for the Facebook Ads Manager
The overall result for two channels of promotion
The cumulative total for all period of promotion (from August 9, 2016, to October 17, 2016) 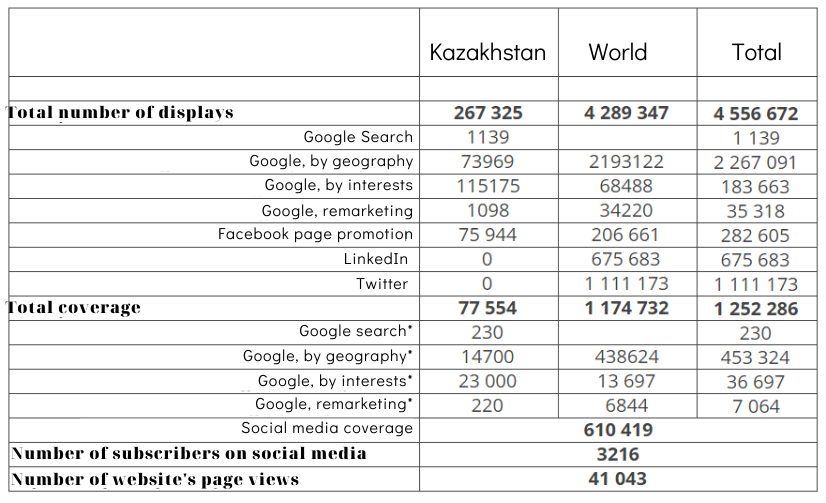